Book to Basics #27 The Bell Jar by Sylvia Plath

It's funny how I tried to avoid writing about The Bell Jar. It's a book that completely tore me to pieces and I find myself fearful of what I have to look back on in order to retell or at least describe the story tucked in Plath's pages.

If depression is ever to be beautiful, it would feel like The Bell Jar.

"I thought the most beautiful thing in the world must be shadow, the million moving shapes and cul-de-sacs of shadow. There was shadow in bureau drawers and closets and suitcases, and shadow under houses and trees and stones, and shadow at the back of people's eyes and smiles, and shadow, miles and miles and miles of it, on the night side of the earth." 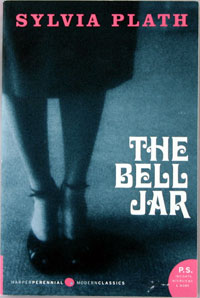 I suppose, part of me found the book inspiring because of it's strong feminine voice that obviously challenged its times--come to think of it, The Bell Jar's voice continue to challenge even the modern mind.

But a huge part of me, I'm sure, couldn't put the book down because it is about insanity.

In a way, I'm supposed to be ashamed to admit that I follow (somehow) the thoughts of an insane person (character); but there's beauty in being insane and in challenging the normal that's why these thoughts, though at times completely fearful and complex, are quite interesting to follow. There's monotony in humming and chanting inside cushioned walls; but there's always that rich excitement lying deep into the core of a crazy mind.

The Bell Jar is a strong blow on some of my views in life, about people and about myself. It really appealed to me because I read about Sylvia Plath and although I know there's so much I don't know about her, reading The Bell Jar felt so intimate and personal to me that after the book was drained out of its juices, I was there quenched with an overflow of prose and lucid thoughts.

I love how The Bell Jar is the author's autobiographical masterpiece. I love how it is the author's deliverance of her soul. Yes, of course, Sylvia Plath committed few years after The Bell Jar was published, but I think, if I should follow the thoughts of Esther Greenwood (Plath's alter-ego), a little bit of Plath died in The Bell Jar's every page.

I am sure, I'm not alone in thinking that the world is crazy and that sometimes the sanest thing one can do is to live on the edge; The Sylvia Plath offers that foresight to know what it's like to fall.

As mentioned, Plath wrote The Bell Jar as her autobiography (or as critics say is her autobiography). I thought of sharing that because yesterday, I got to watch Atlantis Productions showcase of Tony Award-winning Musical "Next to Normal" here in the Philippines. I felt myself torn to little pieces again.


The Bell Jar is available at Fully Booked. For inquiries, visit their website here.